This came even as support for Mr. Senthil was expressed from other quarters in coastal Karnataka and elsewhere. 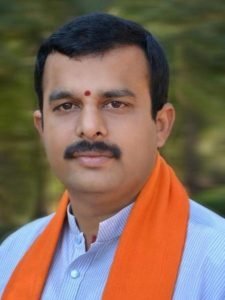 The Bharatiya Janata Party on Tuesday stepped up its attack on S. Sasikanth Senthil, who resigned from the IAS on ideological grounds, with MLA for Karkala V. Sunil Kumar joining the tirade and issuing a veiled threat.

This came even as support for Mr. Senthil was expressed from other quarters in coastal Karnataka and elsewhere.

Speaking at the felicitation of BJP State president Nalin Kumar Kateel, organised by the district unit of BJP here, he warned the former Deputy Commissioner of Dakshina Kannada, without naming him, over his comments on the political atmosphere in the country. He said the Union government would be taking a “strong stand” which would push “people like him” into a corner.

“I tell that Deputy Commissioner and the people with that kind of mindset that it is not just [abrogation of] Section 370. We will enter Pakistan-occupied Kashmir (PoK) and also build the Ram temple [in Ayodhya],” Mr. Kumar said. He said the government would take a strong stand “in favour of the country, and not anti-nationals”.

“The views of our party will not change just because a Deputy Commissioner has resigned,” Mr. Kumar said.

Meanwhile, Congress leader and MLA for Mangaluru U.T. Khader came out in support of Mr. Senthil and took serious exception to the words of the BJP leaders, particularly those of the Karkala MLA. Speaking to presspersons in Mangaluru, Mr. Khader said that no one has the right to make comments on others’ personal decisions.

Ivan D’Souza, MLC, has demanded action against MLA for Puttur Sanjeeva Matandoor for his attack on Mr. Senthil. In a memorandum submitted to Police Commissioner P.S. Harsha, Mr. D’Souza said Mr. Matandoor’s words were irresponsible and demoralising for IAS officers. Mr. D’Souza sought action against Mr. Matandoor and other BJP workers under provisions of the Indian Penal Code.