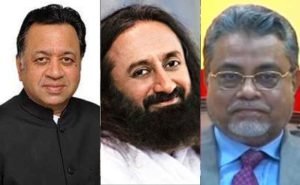 The Supreme Court today ordered mediation to settle the Ram Janmabhoomi-Babri Masjid dispute by a three-member panel including Sri Sri Ravishankar, Justice Kalifulla and Sriram Panchu. The panel has been given eight weeks by the Supreme Court to arrive at a conclusion and four weeks to give a status report. The three members, however, have the liberty to get more people on board if they want, said the top court

Sri Sri Ravi Shankar, 62,  is a spiritual guru, who has been leading a worldwide movement for a violence-free society. Sri Sri had been advocating for a constructive dialogue between the opposing parties on Ram Mandir issue.

Sriram Panchu, 69, is a senior advocate and mediator. Founder of The Mediation Chambers, he had set up India’s first court-annexed mediation centre in 2005, and has played a key role in making mediation a part of India’s legal system. Mr Panchu has written two books on mediation. The top court had referred to him as a “distinguished mediator”, “eminent trainer” and “one of the foremost mediators in the country”.