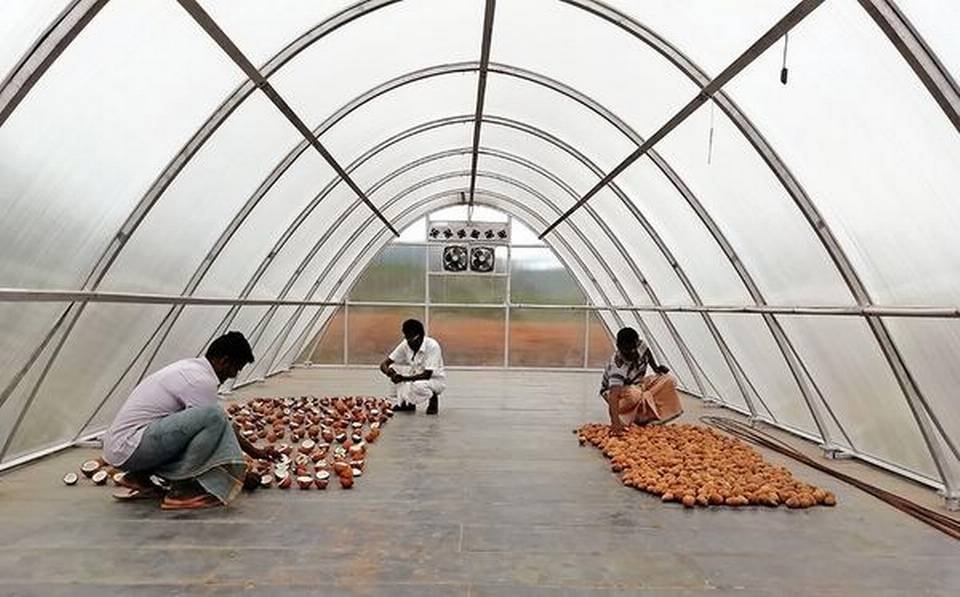 From the Agriculture department under a State government scheme

Four years ago, farmers may not have been able to dry their copra in the open on a cloudy Wednesday afternoon in August for coconut oil production, says V. Kondama Reddy, a coconut farmer from Thalampatti in Vadipatti block.

“Good quality coconuts have pure white pulp. On an overcast day in August, it is hard to control the moisture content essential for the drying process. Earlier, we used to keep it out under the sun for about four days. The quality of the copra was often compromised because fungus would quickly develop,” he says as he arranges the copra shells inside the infrastructure where the temperate is set at 52 degrees.

The heady smell of coconut will soon be made into oil, packaged and sold at retail stores across the country. Some dried copra will also be shipped to the western part of India and widely used.

Since the installation of a solar dryer by the Department of Agricultural Engineering in 2018, drying copra takes a maximum of two days and barely has any impurities, he says.

Mr. Reddy and his family are one of the beneficiaries of the scheme introduced by the State government between 2015 and 2016 where value additions like solar dryers can be procured with a subsidy of 50% to 60%.

This year too, the department has been sanctioned a total of ₹32 lakh as subsidy to set up 12 units across the district.

Assistant Engineers T. Saravana Perumal and T. Kannan say the facility has been widely successful in all blocks. Although it is primarily used for drying of copra in this region, farmers have been using it also to dry fruits li

“Earlier, farmers added sulphur to the copra to ensure that it did not get impacted by moisture and became spoilt. It would lead to large harvest loss. For farmers who have a minimum of 400 sq ft to establish the dryer, it would be widely useful. Many farmers producer companies are coming forward to make use of this,” Mr. Perumal says.

K. Balaji and S. Manimaran, both members of Vadipatti Coconut Farmers Association and residents of Neeraithan village, say the infrastructure is widely used by the association to ensure that 1,000 farmers in their cluster make maximum use of it. “The end product is completely organic and has wide reception as well.”