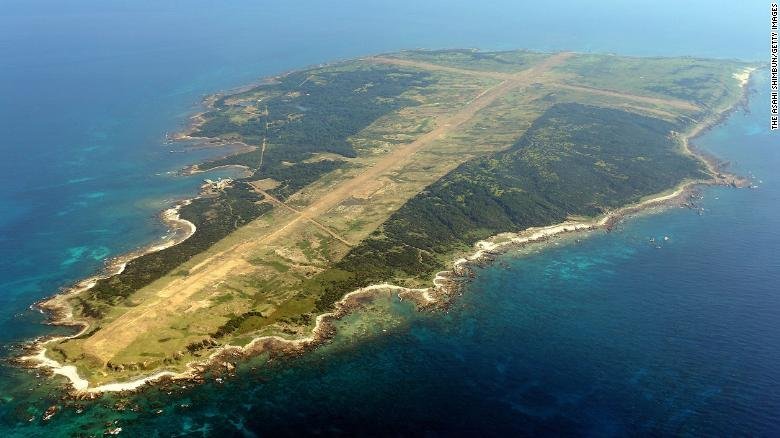 Hong Kong Three square miles of volcanic rock on the edge of the East China Sea may one day be used as an unsinkable aircraft carrier for the United States Navy in the event of war in Asia.

Japan’s government announced this week that it’s buying Mageshima Island, an uninhabited outcrop 21 miles (34 kilometers) from the southernmost Japanese main island of Kyushu. The island, most of which is owned by a privately held Tokyo development company, is uninhabited and hosts two intersecting unpaved runways that were abandoned under a previous development project.
The Japanese government said the runways will be paved and used for US Navy and Marine Corps planes to simulate aircraft carrier landings, though it did not give a time frame in which that could be accomplished as the deal still needs to be finalized.
But once suitable facilities are constructed, the island could also become a permanent base for Japan’s Self Defense Forces as Tokyo looks to strengthen its position along the East China Sea, where it faces competing claims from China over the Japanese-administered Senkaku islands, known as the Diaoyu islands in Chinese.
The “purchase of Mageshima Island is extremely important and serves for strengthening deterrence by the Japan-US alliance as well as Japan’s defense capability,” Japanese Chief Cabinet Secretary Yoshihide Suga said in announcing the deal.
US military officials in Japan said they could not comment on the purchase. Buying Mageshima has been the subject of talks for years. Tasuton Airport, the company that owns most of the island, finally reached agreement with the government in late November.
The island was identified as a suitable site for use by the US as a permanent base for field carrier landing practice under a 2011 agreement outlining the realignment of US forces in Japan.

Spreading out US forces

The $146 million deal also comes as the US military is hearing calls to increase the number of its strategic bases in East Asia in the face of a growing Chinese missile arsenal.
The majority of US combat air forces in Japan are concentrated in just six bases.
Recent studies, including one from the United States Study Center at the University of Sydney published in August, say with their current resources the US forces would be vulnerable to Chinese missile strikes early in any conflict.
One way to mitigate that is to spread US troops and assets out among more bases. 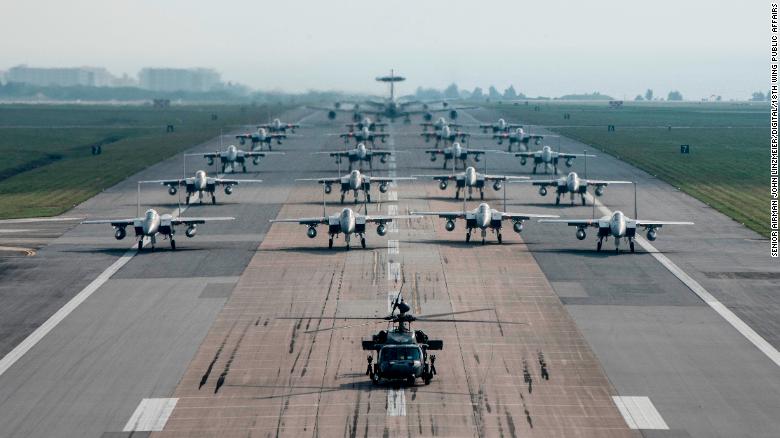 US military aircraft conduct an “elephant walk” exercise at Kadena Air Base on Okinawa in 2017. Experts fear US forces in Japan are concentrated on too few bases.
“Over time, the diversification of Japanese and American bases (individual or joint) will be a trend,” said Corey Wallace, an Asia security analyst at Freie University in Berlin. “The alliance would be more resilient if bases and hardware were more dispersed.”
The theory goes, the more bases you have, the more missiles an adversary would need to fire to overwhelm its target and gain an advantage in a combat scenario.
Permanent land bases are considered more valuable than aircraft carriers, because they can withstand a great number of munitions. In theory, a carrier can be taken out with a single missile or torpedo.
Battle damage to land bases can also be repaired much more quickly than a complex war machine like an aircraft carrier.
“When you target and sink an aircraft carrier it is irreversible,” said Collin Koh, research fellow at the S. Rajaratnam School of International Studies in Singapore.
As for an island? “At the very least it doesn’t sink…. You can take the time and effort to bring it back to operation again,” Koh said.

The new base is also a good sign for US-Japan defense cooperation, which has seen strains in recent years on two fronts: Localities have put pressure on the Japanese government to move US military activity away from population centers; and US President Donald Trump has pushed allies like Japan to take some financial load off US taxpayers.
On the former point, Wallace says Mageshima could eventually see operations from US Marine Corps Osprey tilt-rotor aircraft, taking some of the load off current airfields on the main islands and Okinawa.
Just last February, Okinawa residents, in a non-binding referendum, voted overwhelmingly that the US Marine Corps’ Futenma Air Station be relocated off the island.
That vote came after incidents of parts falling off US aircraft and landing outside the base, including near schools and numerous flashpoints involving US defense personnel and local residents.
Despite that vote, the Japanese government moved ahead with plans to relocate Futenma operations elsewhere on Okinawa.
Similarly, the government could be expected to push back against any challenges to the Mageshima plan from the nearest island of Tageshima, 8.5 miles (14 kilometers) to its east and from where it is administered. 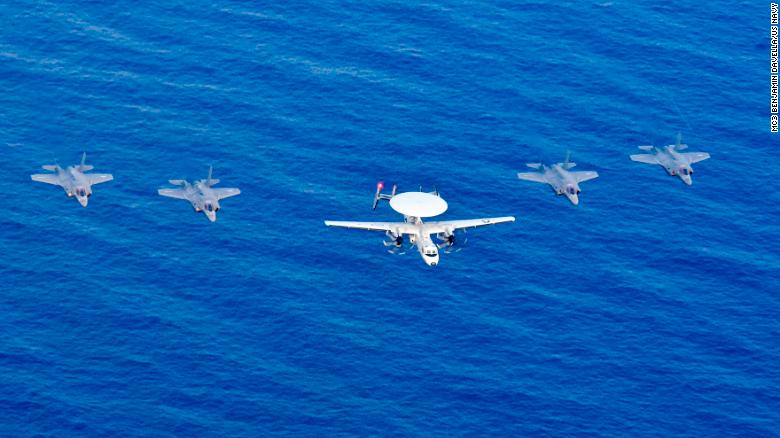 A US Navy carrier-based E-2D Hawkeye airborne radar plane and four US Marine Corps F-35B Lightning jets fly over the South China Sea.
In the larger international picture, Japan is making the right move to keep its most important ally — the United States — happy, said Koh, the Singapore analyst.
“Trump is asking Japan to pay more. This purchase of the island is a move that is part of the whole plan to demonstrate that Japan is willing to shoulder more burden,” Koh said.
And despite the island’s proximity to Tageshima, no one actually lives on it, allowing “the (Prime Minister Shinzo) Abe government to try to balance between its obligation towards the alliance as well as to its domestic constituents,” he said. 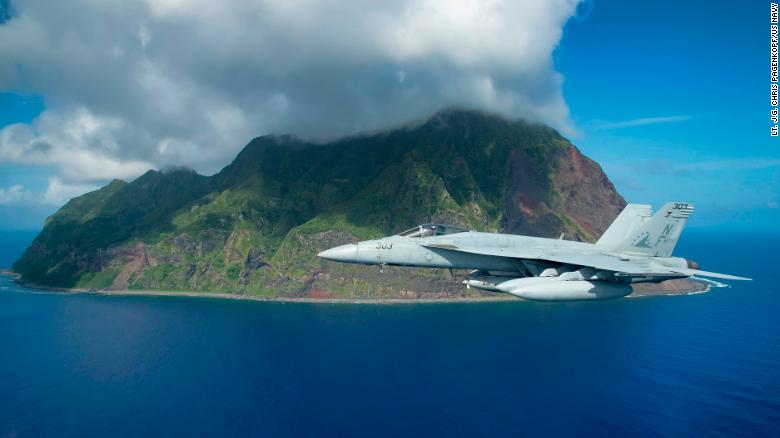 A US Navy F/A-18E Super Hornet jet flies past the island of North Iwo Jima in 2016.
As a practice field, Mageshima will also be more convenient for US carrier pilots, many of which now fly out of Marine Corps Air Station Iwakuni on the Japanese main island of Honshu.
The fliers now practice carrier landings — known as “touch and go” landings — on Iwo Jima, also known as Iwo To, almost 850 miles (1,360 kilometers) away. Flying to Mageshima would cut the journey by 600 miles (960 kilometers).

A chance to show new abilities

Down the line, Wallace says Mageshima could provide for some new cooperation between the US and Japanese militaries — specifically involving F-35 stealth fighters.
Japan has announced it will be upgrading its Izumo-class helicopter destroyers to handle US-made F-35B jets, fighters that now fly off American amphibious assault ships, essentially small aircraft carriers. It’s also purchasing dozens of the short-takeoff, vertical landing jets.
“Japan does not have pilots with any experience landing fixed-wing aircraft on carriers. However, this new facility might offer the opportunity over time for Japanese to gain some familiarity with such operations alongside the US — not only to utilize their own carriers, but for cross decking (sharing) with the United States,” Wallace said.
“Having Japanese F-35s on American naval vessels would be quite a signal,” he said.
Tags: Japanese island, Mageshima Island