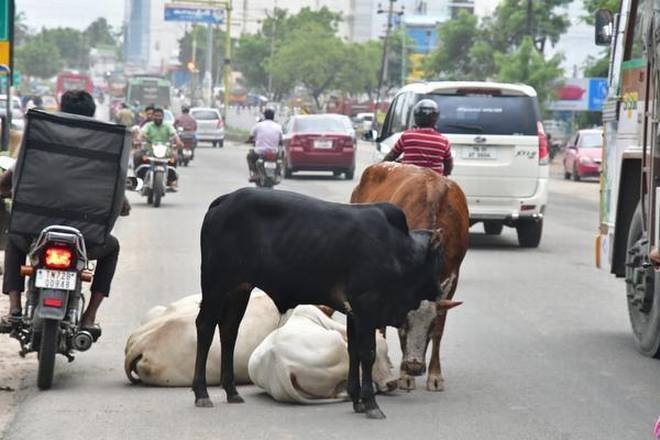 A large number of stray cattle that roam the roads and even sleep on busy strecthes in the nights have made the roads unsafe for vehicle users, especially two-wheeler riders, women, children and the elderly in Tirunelveli city.

Almost all roads traversing Tirunelveli, including the arterial Madurai–Kanniyakumari four-lane national highway, are witnessing accidents caused by stray cattle in the nights. Since the soil is wet after the recent rain, the cattle, which have been abandoned by their owners, occupy the dry roads to rest or sleep.

An Assistant Engineer attached to the Department of Public Works (Buildings) was killed in a road accident at Perumalpuram in 2019 when his two-wheeler hit a stray bull standing on the middle of the road during rain in the night. As power went off in that area, the victim hit the bull and fell down on the road and sustained a serious head injury.

The Assistant Engineer, hailing from Nagercoil, died in a private hospital in Kulavanigarpuram.

Since stray cattle have caused several accidents in the past, Tirunelveli Corporation started impounding them and released them only after their owners paid the fine. The unclaimed animals were handed over to goshala and then to women from below poverty line families by ‘Mahalir Thittam’ to start their livelihood. This practice has apparently been given up now.

Corporation officials said 30 cattle heads were impounded in Melapalayam Zone last week and each cattle head could be released in the presence of two witnesses and only after the payment of a fine ₹5,000.

“However, we are being threatened by members of caste outfits, politicians and former councillors of Tirunelveli Corporation to release the animals at the instance of the cattle owners, who do not have cowsheds. Since these people are about to face the voters for the upcoming urban local body election, the Corporation employees are forced to release the cattle,” a senior official said.

Collector V. Vishnu said the Corporation carried out a drive last week to clear stray cattle from the roads. “We will step up the drive.”

Tirunelveli City Police Commissioner N.K. Senthamarai Kannan too promised to carry out a sustained drive against the menace.