Bulls and tamers display their skills in front of 50,000 people gathered at Alanganallur for jallikattu 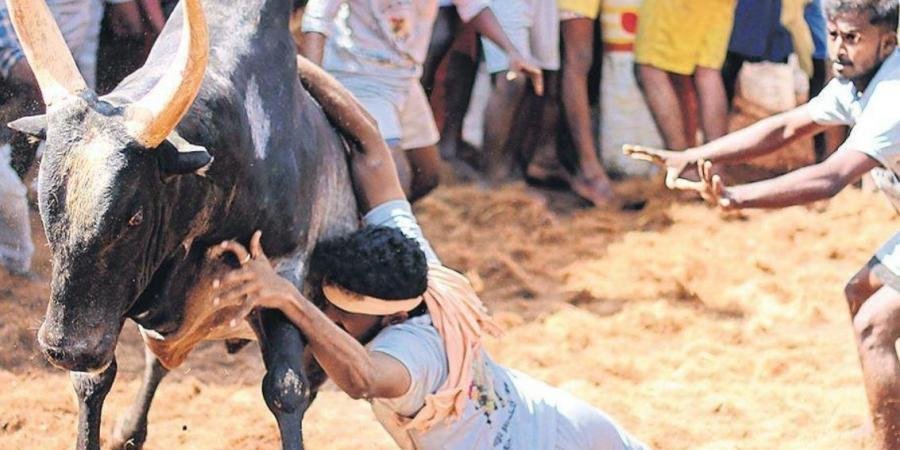 MADURAI: It seems like only yesterday the State erupted in protest for jallikattu. When the Alanganallur jallikattu was flagged off by Collector TG Vinay, in the presence of Revenue and Disaster Management Minister RB Udhayakumar, Solavandhan MLA Manickam and monitoring committee head retired principal district judge C Manickam, the fervour was as undiluted as it was when the ban was lifted. Such was the carnival that even Chief Minister Edappadi K Palaniswami and his deputy O Panneerselvam could not restrain himself from announcing a car as the prize for the best tamer, and the bull owner.

As many as 700 bulls and 921 tamers congregated in the arena in the raw display of valour in front of 50,000 spectators. Mishaps were reported and two among the 30 injured tamers – Sreedhar from Sholavandhan and Chellapandi from Chekkanorani – died. The proceedings began soon after three temple bulls were unleashed into the arena. The fourth bull was unleashed as a mark of honour and respect to the jallikattu protesters, who brought back the sport to life.

The event was organised under the watchful eyes of the organisers, who lost no time in disqualifying tamers violating rules.Ranjith Kumar of Alanganallur emerged the winner by taming 16 bulls in one round. Ranjith had entered the game in the ultimate ninth round. Karthik of Ayathampatti in Alagarkoil secured the second position by taming 14 bulls, while Ganesan of Aritapatti came third after taming 13 bulls.

The first runner-up was awarded a cash prize of `15,000 and a bike; and second runners-up received a cash prize of `10,000. All were given certificates of appreciation and shields.The majestic bulls were crowned equal winners in the sport. Maaranadu from Kulamangalam showed his valour for 53 seconds, not allowing any tamer come near him. The second position went to the Ravanan raised by Anuradha, a police official from Pudukottai. Health Minister C Vijaya Baskar, MP O P S Ravindranath Kumar and BJP leader Ila Ganesan were present at the event.

Dindigul: It was a spectacle of brute force meeting unflinching bravery that the villagers Nathamavadipatti and Neikarapatti beheld on their jallikattu arenas on Friday. Over 800 heads of bulls were brought to the venues from across the district and beyond; ready to meet them were over as many as 500 tamers. What ensued entered the village annals.