The passing of the ‘unconstitutional’ Trans Bill 2019 on Constitution Day and Transgender Remembrance Day, activists say, is a slap on the face of Constitution and democracy.

Transgender activists are calling November 26 the “Gender Justice Murder Day” following Rajya Sabha passing the contentious Transgender Persons (Protection of Rights) Bill, 2019 despite months of agitation by transpersons and activists against it.

Ever since it was passed in a surprise move in Lok Sabha exactly eleven months earlier, the Bill has been slammed by lawyers, gender rights activists, Members of Parliament and Opposition and most importantly, the transgender community as a whole.

‘We Don’t Want This Bill’

The Bill was moved for consideration and passage in the Rajya Sabha by Social Justice and Empowerment Minister Thawar Chand Gehlot on November 20 despite many in the transgender community calling it unconstitutional and violating of basic fundamental rights.

“What happened was horrible. We DON’T want this Bill,” Chennai-based trans rights activist Grace Banu told. adding that the government by passing the Bill had “murdered gender justice in India”.

According to the activist, the bill takes away the right of trans persons to determine their own sex and bind them to binaries. The most astonishing thing according to Grace is that the decisions were taken by people who did not even understand or acknowledge the trans identity.

Grace, who has been part of the anti-Trans Bill movement from the very start, said that she remembered her first meeting with members of the Parliamentary Standing Committee that was instituted to look into the Trans Bill and make recommendations before it was passed in Lok Sabha. “Most of the MPs did not know anything about trans bodies or the trans experience, many were just curious about what we had ‘down there’,” she said.

Before the Bill was passed, DMK leader Tiruchi Siva stressed that given the sensitivity of the issue and the insult, discrimination and atrocities inflicted on the transgender community, the bill should be sent to the select committee. However, scientist and activist Bittu Kondaiah said that the appeal fell on deaf ears, much like all suggestions to amend the bill made by Siva and Rajiv Gowda among others.

But to many who have been part of the movement such as Bittu, the decision does not come as a surprise.

“We knew this would happen despite the trans community having tried strenuously to oppose it,” Bittu, who is part of the Telangana Hijra Transgender Samiti, said. “They have completely resisted the will of the people in a matter that is going to directly affect the community,”

Kondaiah admits there have been instances when the community experienced a positive institutional response, such as in 2017 when the Standing Committee consulted with the community and made positive suggestions to improve the Transgender Persons (Protection of Rights) Bill 2016. None save two changes were made to the draft Bill before being passed in Lok Sabha.

He and other activists such as Hyderabad based Rachana Mudraboyina were also heartened to see the number of politicians and MPs who opposed the passing of the Bill. Among other MPs, YSRCP’s V Vijaysai Reddy said that transgenders should be allowed self-certification and added that the bill is sent to the select committee. Derek O’ Brien of Trinamool also said that select committee should scrutiny it and added that the matter is not “politics”. However, to Rachana, the change of heart came as too little too late.

The passing of the Bill, Bittu felt, is also in keeping with the present government’s “trend to pass bill after bill” with the “maximum possible subversion of the democratic process” regardless of opposition or criticism.

It was bizarre of the government to not consult the community on important decisions such as laws that provide reservation to transpersons and protection from sexual violence. She added that none of the committees or the ministry that decided on the Bill had any trans persons as members. “They never consult any of us who are protesting for something that will deeply affect us for generations,” Rachana who works with Telangana Hijra Intersex Transgender Samiti and runs India’s first transgender issue-based YouTube channel ‘TransVision’, told.

Incidentally, not a single member from the Standing Committee was transgender, neither are any of the MPs transgender.

Some of the most problematic provisions of the bill that have been criticized are included primarily in the fact that it is opposed to the NALSA judgement which accorded transgenders third gender status. The judgment also allowed transgenders the right to self-identification, something that is in direct contradiction to the Bill which seeks to provide a mechanism for social, economic and educational empowerment of transgenders by getting them to prove their identities to a panel of inspectors.

The bill is also silent on the question of reservation for the trans community, something that activists like Grace Banu and Anindya Hajra of the Pratyay Gender Trust have been fighting for. Grace, who was the first transwoman to ever get admission in an engineering college in Tamil Nadu, pointed out that the lack of reservation for transgender did not only affect education opportunities available to trans persons but also future livelihoods.

As a Dalit transwoman, Grace also felt that the bill provided no protection to minorities with the queer community such as tribal, Dalit or Muslim trans or queer persons who often face the worst of the discrimination due to lack of financial and social security.

Another problematic aspect that Rachana points out is the fact that the bill completely misunderstands gender and transexuality and tries to interpret the trans and queer identity through the binary lens.

Furthermore, it provides no protection to trans persons from sexual violence. The bill does not mention any punishments for rape or sexual assault of transpersons as according to Sections 375 and 376 of the Indian Penal Code, rape is only when a man forcefully enters a woman. In terms of protection, the bill offers a measly six months to two years imprisonment for those found guilty of atrocities against transpersons.

Two-tier systems for changing binary forms of ID and the requirement of surgery to be qualified as transgender are yet other problematic aspects of the Bill.

“Constitution by Our Side”

As soon as the Bill was passed, activists across the country have started to agitate once again. “We will not support this bill, we will file writ petitions in the Supreme Court,” Grace said. Members of transgender, intersex and gender non conforming communities are holding a press conference in Delhi today to publicly outrage against the provisions of the bill and plan further action. 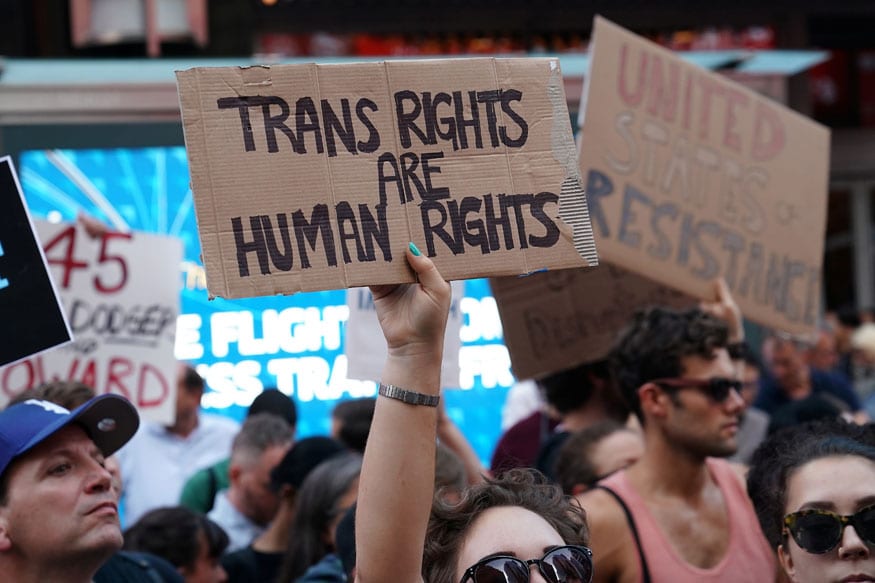 “The bill violates several fundamental rights and those grounds it is invalid in the Constitution. We will have to challenge it in court,” Bittu concludes.

Ironically, November 26 is also observed as Constitution Day and Transgender Remembrance Day. The passing of the Bill on this very day, activists claim, is not just a slap on the face of the Constitution but also to the memory of those trans and non-binary gender-conforming individuals who lost their lives due to violence caused by institutional discrimination, abuse and bullying.