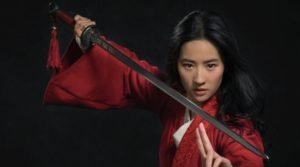 Disney just unveiled the first look of its upcoming movie, Mulan, which stars American-Chinese actress, model and singer Liu Yifei in the titular role. In the photo, Liu Yifei can be seen posing with a sword in a red and white gown like the animated version of the iconic Disney character.

The actor will be seen portraying the role of a girl who disguises herself as a man in order to refrain his old father from joining the military to fight the invading Huns. The film is set in China during the Han dynasty. Mulan later went on to join the Imperial Army herself and saved China from the invaders. According to The Hollywood Reporter, the casting director saw 1000 candidates across five continents before zeroing in on Yifei.