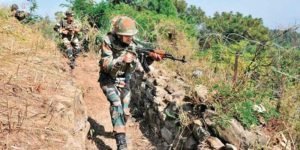 SRINAGAR: The Indian Army said on Tuesday that two Pakistani soldiers were killed in retaliatory fire on the Line of Control (LoC) in Jammu and Kashmir.

On Monday, an Indian soldier was killed in the LoC’s Tangdhar sector in unprovoked firing from the Pakistani side.

“Our troops carried out calibrated operations last night in which two Pakistani soldiers were killed.”